A few years ago I was approached to help solve a very interesting mystery.

A fellow fingerprint enthusiast had bought an old “fingerprint book”, and inside was an envelope, which had nothing to do with the book in which it was housed.

On the envelope there was writing that says New Scotland Yard 14th April 1920, and very professionally taken fingerprint impressions claiming to be the right fore finger of a Superintendent Collins and the right fore and middle fingers of a J.F.S.. 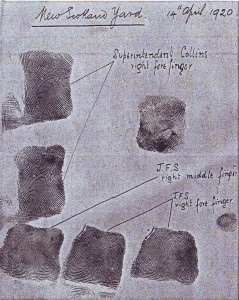 The first question I was asked was whether I had anyway of establishing whether the impressions of Superintendent Collins were in fact those of Superintendent Charles Stockley Collins, the man in charge of the New Scotland Yard Fingerprint Department at that time and the person responsible of introducing fingerprint evidence to the British courts at the Harry Jackson and Stratton Brothers trials.

As I had uncovered that I am related to Superintendent Collins, it was assumed that I may have found a set of prints of the great man to be able to compare… unfortunately that assumption was incorrect… but that wasn’t going to stop me.

First of all I remembered that there were fingerprints associated to a portrait of Charles published in Volume 5 of The Police Encyclopaedia by Hargrave L. Adam; but on close inspection I believe, based on my experience, that they are probably impressions of his left and right thumbs. 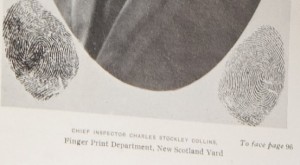 I hadn’t quite given up hope yet…..

I remembered that Charles had 2 published works of his own to his name:

I know that anywhere that I have had an article published, or I have published myself; I have used my own fingerprint impressions.  There are a couple of reasons for this….

Firstly, it is acts as a signature / autograph (although it’s a little on the egotistical side).  As my experience tells me that no other person has, has ever had, or will ever have the same fingerprint as me; I see it is a good form of authenticity.

Secondly, if I have to illustrate any fingerprints in an article or document, then it is much safer and easier to use my own; as I am not sure of the legal implications of publishing another persons fingerprint without their permission… but I will leave that question open to a future post.

Eureka!!!!…  On page 12 of Fingerprint Clues there is a mock threatening note from a Bill Sykes with 2 finger impressions (probably a right forefinger and right middle finger in sequence). 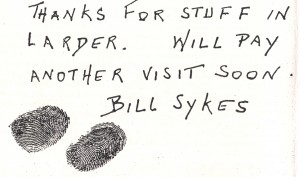 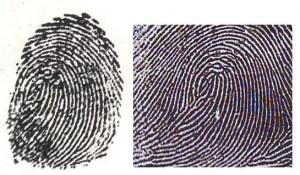 Unfortunately I have never been able to establish who is J.F.S.

It was very common to get visitors to the Fingerprint Department in New Scotland Yard in its formative years e.g. journalists, overseas police officers, officers from other parts of the UK; and I am sure that Superintendent Collins took great delight in demonstrating the fingerprint system that he helped in adopting.

I have asked many fingerprint historians and members of Stockley-Collins family for any ideas, but to no avail.

Can anyone out there offer any clues as to whose fingerprints are J.F.S.?